This article was originally published in HTech Blog

Talking about software architecture is complex, often due to the technical aspects but largely due to the fact that there’s no single answer, rarely conclusions and always depends on the context.

Why it depends on the context? because it can contains a lot concerns; the strategy and business model, cost and time constraints, team capabilities and skills of each individual team-member, technologies/techniques and their accidental complexity, etc. So, our technical decisions might be biased by all of these things and will change our path toward desired state.

The fact is, technical debt is inherent in software and this gives us enough reasons to look for answers and the best way to build software; even, when the reality can be quite painful.

Recently at HTech, we started a project that aims to manage the features of other software products. From a digital product perspective, it could be categorized as a back-office software. For me, it represents a set of rules that acts as an interface of business rules from other products. Some considerations about our project are:

Generally, in the software architecture space, what we’re looking for is an appropriate component segregation. The traditional way is separate the software in layers, and we understand as “layer”, as a segregation oriented to non-functional responsibilities; sometimes it’s just in a logical and chaotic way; and at best, physical and orderly. 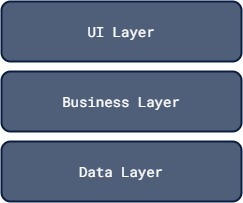 Something that these approaches have in common is that all of these are trying to keep the core/business layer (a.k.a domain) independent of frameworks and isolated from the rest of the layers. My mental representation of this looks like: 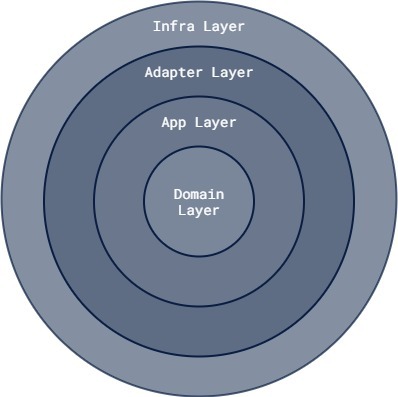 In our backend, generally, we follow these approaches. Although I agree with this, it’s true that for many contexts these approaches might not be suitable -or at least not from the beginning-. These architectures are usually complex by nature, they have rigid rules of inversion of control, a lot of abstractions and in many cases they are unnecessary.

My aim here isn’t to break with the separation of concerns -and other benefits that these approaches bring us- but given the conditions of our context, such as the fact that the team could be constantly rotating in a bounded time, I am looking for a way to reduce the learning curve that the concentric architectures has. But, at the same time, without losing the notion of the fact that the domain must be pushed toward the center and keeping the ubiquitous language.

The first time I heard the “vertical-slices” term was in the agile world; and recently, I had the opportunity to listen an online talk by Jimmy Bogard, who promotes an architecture oriented to vertical slices. Basically, his approach is in the following way: 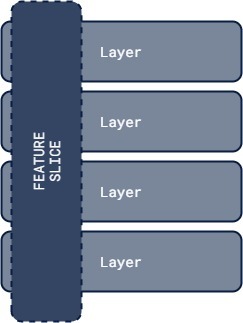 The way he describes this is:

When adding or changing a feature in an application, I’m typically touching many different “layers” in an application. I’m changing the user interface, adding fields to models, modifying validation, and so on. Instead of coupling across a layer, we couple vertically along a slice. Minimize coupling between slices, and maximize coupling in a slice.

So, We can assume that the separation by features can be done simply by organizing the code with the following structure:

However, the problem with this -and I have always seen with backend APIs- is that we tend to build a lot of application/domain services, something like this:

This leads us to build a kind of main service that acts as an orchestrator in a typical procedural way; at other hand, this makes us lose notion of which service we need to use when adding new functionality and, even, where to physically locate that service. After a while it becomes chaotic, and indirectly causes, just to mention an example, that our domain entities become into anemic domain models.

Given that, the need to have an intermediary that works as an orchestrator and avoid the use of domain and/or application services for this purpose. One way to solve this is through the mediator pattern. 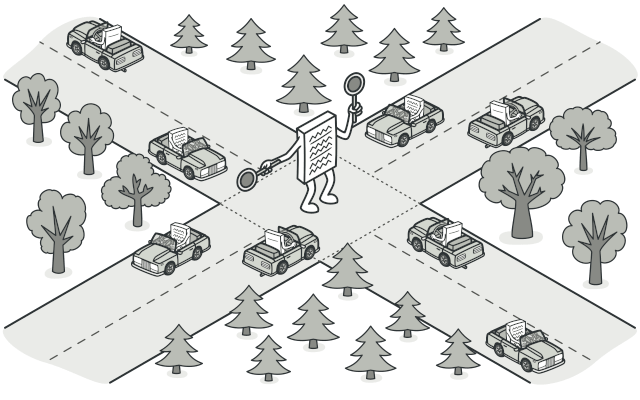 At this point, we find Mediatr, which is a library that implements the mediator pattern by decoupling the in-process sending of messages from handling messages. The approach, considering the organization by features, is given by the following way: 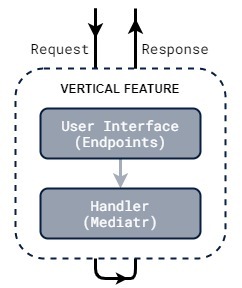 First of all, assuming we are using ASP.NET Core and its built-in injection dependency pattern, we need to configure the Mediatr dependencies to register our handlers:

We can think that the Handlers acts -in some way- as the Use Cases of clean architecture. This is the entry point of our feature, from a business logic perspectie. A brief example:

As you notice, there are two nested classes: Query and Result. This two types are scoped under GetBy static class in order to -logically- structure the use case of our feature. That means, this isn’t a generic input/output, this is only used in a specific case GetBy. With this, the inputs and outputs of our API are easily to identify and gives us more evident the use of CQRS pattern -which by the way is more like conceptual pattern rather than archiectural pattern-.

CQRS is simply the creation of two objects where there was previously only one. The separation occurs based upon whether the methods are a command or a query (the same definition that is used by Meyer in Command and Query Separation, a command is any method that mutates state and a query is any method that returns a value).

There are some other libraries to implement this, even from scratch, but at this time I’m using the same Mediatr library, implementing IRquest and IRequestHandler interfaces.

These concerns (Querys/Commands, Handler and DTO’s) can be written in the same file. However, I prefer -but not for all cases- to separate each of these into single files, namespaced by static partial class.

Then, our controller methods will take the following form:

Take note that the goal here, is to turn the controller into a logic-agnostic component that just represent a set of input/outputs points for our api.

With this approach, each vertical slice can decide how to manage their request/response:

Under this organization, the important thing is to take care the growth of our Handlers. Is extremely important consider the capabilities of our team, to timely detect code-smells and push logic down into domain layer and out of Handlers. There are some code-smells that I consider are very likely to occur with this approach and we must bear in mind.

For example, this bad smells in logic and/or behavioral code:

We can use refactoring techniques that are very well documented by Martin Fowler, such as:

Eventually, if we’re on the right way, the approach will take on a domain-centric style. 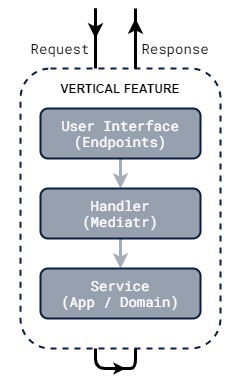 Also, we can organize our input and output rules through pipelines around the core. This pipelines can be implemented with the same Mediatr library: 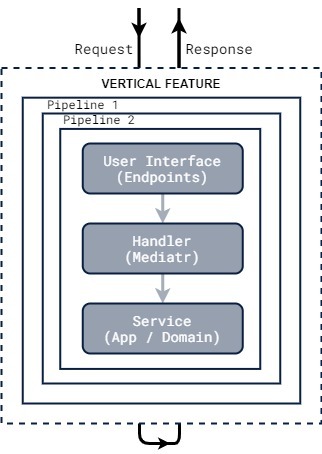 This approach will helps us, in addition to orchestrating certain logic, to be able to recognize what we must push to the domain or to external layers, without worrying at the beginning of our project. And, mainly, it can guide to the team to work on independent features without conflicts and minimize problems to identify how the architecture works.

My aim with this is to experiment another approach to organize our code and try to measure in order to find if this really brings productivity to the team; but, without losing sight of SOLID principles, keeping technical debt out and promoting refactoring as a daily practice.

[WIP] The complete demo of this post can be found here